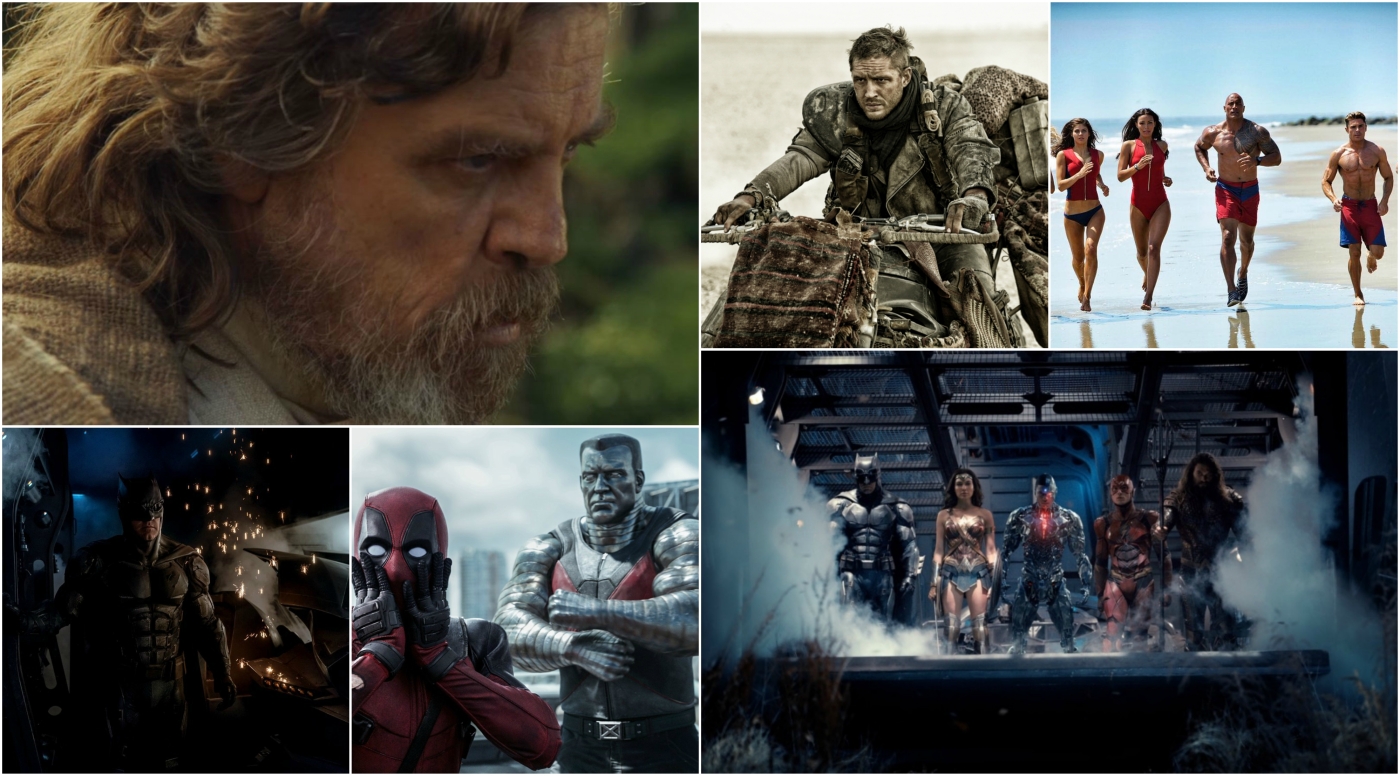 Here is a look at the movie news that came out this week.

A new Justice League image was release early this week showing Ben Affleck’s Batman, Gal Gadot as Wonder Woman, Ray Fisher as Cyborg, Ezra Miller as the Flash and Jason Mamoa as Aquaman. A notable absence is Henry Cavil as Superman, who despite (spoiler alert for BVS) dying in Batman V Superman has been seen on set and confirmed for the movie. The image itself looks cool and shows the new look for many of the heroes. I am not a fan of how Cyborg looks, I feel it is too much of a bad transformer. Aquaman and Flash both look awesome and the image itself is a good marketing tool. It shows the League preparing for something to go down. Hopefully we get a full trailer soon to get a better insight into the movie.

With Rogue One out and dominating the Box Office the focus will now shift onto promoting the latest Star Wars Saga film, Episode 8. Apparently it has a title but the public are not ready for it. Since The Force Awakens ended with a cliff hanger with Rey holding out Luke Skywalker’s lightsabre that he lost (along with his hand) during his battle with Darth Vader in Empire Strikes Back. Whilst fans will probably have to wait until April to start getting some serious promotional stuff, Director Rian Johnson recently spoke to USA Today about what he has in store with Episode 8.

“I don’t want to skip ahead two years,” Johnson says. “I want to see the very next moment of what happens.” How Rey and Luke relate to each other is the key relationship in Episode VIII, and Johnson says “a large part of the movie” will be spent addressing why Luke’s there and what he’ll do next. Like Luke, Rey has been pulled into a bigger world by connecting with the Force, “but part of what’s she’s dealing with is the realisation that she has this power and this gift,” Johnson adds. “She’s taking her first step to coming to terms with this thing inside her that she never knew was there and is just starting to reveal its potential.”

This is really exciting to hear that we will see the moments after their meeting and that the movie will focus heavily on Luke and the Master and Apprentice relationship we have wanted to see. This will also be the first time a Star Wars Saga movie picks up directly after the last movie finished which raises some questions about what the opening crawl will say, since all the movies start in space how will this one, and will we see a time jump which we have not seen in any other Star Wars Saga films (Rogue One had time jumps but it is not a Saga film).

Johnson also mentioned, “I want it to be a blast and to be funny and to be a ride the way The Force Awakens and the original Star Wars movies were.” That’s not to say there won’t be darker elements similar to those seen in the aforementioned films, or in the same vain of some of Johnson’s other works (Brick, Looper and Breaking Bad). It will still have some of those entertaining and humorous moments that we saw in The Force Awakens, especially with characters like Finn, Poe and BB-8 returning. Star Wars Episode VIII will be in cinemas December 15th.

Last week Ben Affleck, who is tasked to write, direct, and star in the new Batman movie, made comments that he may not do it. He is quoted saying, “It is not a set thing and there’s no script. If it doesn’t come together in a way I think is really great I’m not going to do it.” These are pretty alarming comments to come from the man who is in charge of making The Batman. There are some theories floating around regarding behind the scenes problems at Warner Brothers and DC Films but no concrete evidence behind that. Earlier this week Affleck was on Jimmy Kimmel and reaffirmed he is still involved in the project he just needs some space. Here’s what he said,

“I’m gonna direct the next Batman, we’re workin’ on it. It’s one of those things that’s really frustrating because like with Live by Night, it took me a year and a half to write it and get it ready and I worked really hard, it’s just nobody gave a shit. No one was like ‘Where’s Live by Night?!’ But with Batman I keep getting the like, ‘Where’s the fucking Batman?!’ and I’m like ‘Bro I’m workin’, give me a second!”

Sounds like someone needs a hug and after the 2016 he’s had its not unacceptable, and The Batman would be his hardest project to bring to life since it has a massive fanbase with high levels of expectation surrounding it. I am really happy he is staying on the project; he was the best part of Batman V Superman and he has written and directed some incredible movies. The Batman is expected to start shooting during the American Summer and stars Ben Affleck, Jeremy Irons, J.K. Simmons and Joe Manganiello. Live By Night is in Australian Cinemas on January 26th 2017.

The second stand-alone Star Wars movie has added some incredible star power this week with Woody Harrelson confirmed to be joining the cast in a mentor role to Alden Ehrenreich’s Han Solo. Harrelson is coming off great performances in The Hunger Games and The Edge of Seventeen where he plays the mentor extremely well. Here’s what Harrelson had to say during an interview with Mashable.

“I’m a mentor to Han, but im also a bit of a criminal” “I don’t think I’ll have a lot of makeup or anything. We’ll see how that look develops — I’m meeting with those guys tomorrow, the hair and makeup and stunts and everything. We’ll just have a little discussion about that.” And finally “I don’t think I should say much more than that, because the Force is not allowing me,”

The Han Solo movie already has an impressive cast with Ehrenreich as Han Solo, Donald Glover (Community) as Lando Calrissian and Emilia Clarke (Game of Thrones) as an undisclosed character. The film will be directed by Phil Lord and Chris Miller, the duo behind The Lego Movie and the Jump Street Films.

It looks like more members of the Marvel family will be showing up in the next Avengers film, Avengers Infinity War. We have Spider-Man, Thor, Gamora and Betty Ross joining the already stacked cast which see the Avengers, The Guardians of the Galaxy, Doctor Strange, Spider-Man, Captain Marvel and many more join forces to take on the Mad Titan Thanos. Click here for the full cast list.

In more Avengers news Peter Dinklage, better known as Tyrion Lannister from Game of Thrones is being eyed for a role in the new Marvel Epic. It is unknown what role he is being approached for but it will be exciting to see him in any role. Dinklage had previously played Boliver Trask in X-Men Days of Futures Past.

Warner Brothers confirmed this week they are going a head with their Green Lantern Corps movie that will fit into the DCEU. David Goyer and Justin Rhodes have been give the job of writing the movie, whist Geoff Johns and Jon Berg will be Executive Producers. The movie will include two of the better-known Green Lanterns in Hal Jordan and John Stewart, though no casting has been announced. If Armie Hammer’s attempts to troll DC fans on twitter mean anything, I would be excited to see him play Hal Jordan, as it would be a far different approach than the Ryan Reynolds attempt from 2011. Tyrese Gibson, from the Fast and Furious movies has campaigned on Social Media for the role of John StewardThe movie is expected out in 2020 and has been referred to as Lethal Weapon in space. I would be happy if we could refer to it as a good movie.

Tom Hardy made some comments during his recent press tour for his new TV Show Taboo regarding the future of the Mad Max films. He mentions being anxious to get back to the project and knows there is the potential for a Furiosa movie that could come first. He also confirmed that he signed on for three more Mad Max films, which is extremely exciting as his first outing as Max was fantastic, despite it being more about Charlize Theron’s Furiosa than Max. Here are the full comments.

“I’m anxiously waiting to find out. There’s mythology to do with Mad Max that spans copious amounts of tales. What’s wonderful about George [Miller] is that he’s created sagas for Max and sagas for Furiosa, so it’s what he chooses to focus in on. I’m really just waiting for the call like, “All right, let’s get the leathers on and get back out there and do some more.” It’s there. I’m just waiting for it and looking forward to it.”

When asked if Mad Max: The Wasteland is still happening he responded with this quote.

“Yeah, as far as I’ve signed to do three of them. It’s a question of when. I’m not sure it’s called The Wasteland or not ‘cause you never know. These titles change all the time. But, there’s definitely another Mad Max project pending.”

Here’s hoping Tom Hardy can find time in his busy schedule to reprise his role as the titular Mad Max.

It was announced that Colossus, Negasonic Teenage Warhead and Dopinder would be return for the sequel to the 2016 hit Deadpool. Stefan Capicic, Brianna Hildebrand and Karan Soni are all reprising their characters from the first film. The movie will also see the return of Ryan Reynolds as Deadpool and introduce Domino and Cable, though not casting news on that front.

Martin Scorsese announced this week that his long in development Biopic about the life of Frank Sinatra would no longer be going forward due to Sinatra’s family not being comfortable with certain issues from his life being put in the film.

Here is the comments made to the Toronto Sun via Collider.com

“We can’t do it…I think it is finally over. They (remaining members of the Sinatra clan) won’t agree to it. Open it up again and I’m there!”

“Certain things are very difficult for a family, and I totally understand. But, if they expect me to be doing it, they can’t hold back certain things. The problem is that the man was so complex. Everybody is so complex—but Sinatra in particular.”

We got a new Red-Band trailer for the adult comedy based on the 90s TV show staring Dwayne Johnson and Zac Efron. This looks like it could be similar to the Jump Street movies that it will be silly but fun. For a look at the trailer check it out on The Rock’s Facebook page Here.